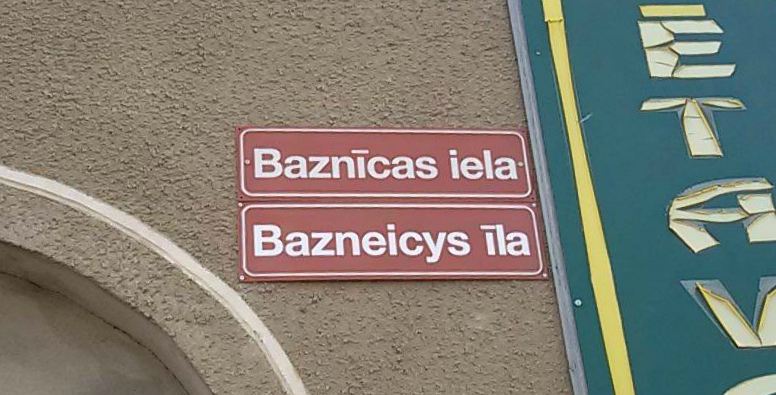 Latgalian language in Latvia: between politics, linguistics and law

Latgalian language in Latvia: between politics, linguistics and law

Social and historical developments on the territory of today’s Latvia contributed to the formation of the two forms of the Latvian language. The Latvian literary language has its roots in the 16th century and its development was heavily influenced by the German language and the Lutheran Church. It is based on the central dialect (vidus dialekts). The Latgalian written language was affected by Slavic influences and the Roman Catholic Church. This variant is based on the Upper Latvian dialect (augšzemnieku dialekts).

There are currently two approaches to the Latgalian language in Latvia. The so-called scientific approach considers Latgalian as a dialect of the Latvian language with a written variant, while the so-called radical approach acknowledges Latgalian as a separate language. Recent political developments and regionalist movements in Europe have influenced the respective discourse in Latvia, as not only some Latvian politicians, but also some linguists more and more frequently call for the recognition of Latgalian as a separate language.

Legal status of the Latgalian language

In 1991, Latvia regained its independence and began to introduce specific laws and regulations shaping the country’s language policies. Due to the large percentage of national minorities (mainly Russians) in Latvia, its successive governments have been consistently implementing a policy of Lettonization, while ensuring certain freedom of action for national minorities and the region of Latgalia.

On 5 May 1989, the Supreme Council (legislature) of the Latvian SSR adopted the Language Law (Valodas likums) which acknowledged Latvian as the sole official language. However, the most important document pertinent to the language policies in Latvia is undoubtedly the Official Language Law (Valsts valodas likums). It was adopted by the Saeima of the Republic of Latvia on 9 December 1999 and come into force on 1 September 2000. This Law introduces the official Latvian language as the obligatory in the state and local government institutions and enterprises, including companies in which the greatest share of capital is owned by the state or a local government, as well as in courts and judiciary. It also imposes the duty to use the official language in record-keeping and documentation throughout Latvia. The Law guarantees “the maintenance, protection and development of the Latgalian written language as a historic variant of the Latvian language” (Section 3, para 4). As for other languages used in Latvia, the law acknowledges them as foreign, with the exception of the nearly extinct indigenous Liv language.

The Official Language Law is linked with a number of other acts pertinent inter alia to education, citizenship, radio and television broadcasting. Since 2003, a Subcommittee of the Latgalian Orthography was established as a part Latvian Language Expert Committee in order to regulate the spelling of the Latgalian language. As a result of its work, the new rules of the Latgalian orthography were adopted in 2007.

Use of Latgalian in education

Currently, there are no schools with the Latgalian language of instruction in Latvia. Six regional schools offer local culture classes with the elements of learning of the Latgalian language (in Baltinava, Makašāni, Kārsava, Nautrēni, Rēzekne and Tilža). A state standard for the teaching of the Latgalian language in basic (4-9 grades) and secondary (10-12 grades) school was developed.[1] However, funding for and organization of the Latgalian education in kindergartens and primary and secondary schools is not foreseen by the Ministry of Education of Latvia. Meanwhile, the official regulations allow the possibility to learn Latgalian, if this decision is made by local authorities and parents of the students. Nevertheless, all related costs should be covered by the initiators rather than the central state budget. The average annual number of students learning Latgalian constitutes about 150-200 pupils in basic schools and about 150 – in secondary schools.[2]

Latgalian and the religious domain

Apart of communication in families and neighborhoods, the Latgalian language is regularly used in the Roman Catholic Church in the region. This is one of the domains where the use of this language has not been interrupted throughout history. Teaching in Latgalian in churches was organized by the Jesuits; it dates back to the second half of the 18th century and continued throughout the 19th century. Even in Soviet Latvia, masses in many churches of the region were celebrated in the Latgalian language. Currently, Latgalian serves the spiritual needs of Roman Catholics in Latvia along with the Latvian, Polish and Russian languages. It should also be emphasized that the borders of the Diocese of Rēzekne–Aglona coincide with the area of Latgalian vernacular, which has been for decades contributing to the promotion of the Latgalian consciousness by the Roman Catholic Church.

Use of Latgalian at the local level

The vast majority of Latgalians speak Latvian, Latgalian and Russian on daily basis. The data of the public opinion poll suggest that 62.1 percent of respondents in the region (representing different ethnic groups of Latgalia) declared ability to speak Latgalian, while 36 percent could write in this language.[5] 35 percent of the respondents would like to see Latgalian as a separate language officially functioning in Latvia.[6] One should note that in some parts of Latgalia the Latgalian language is used by 87.5 per cent of the population.[7]

As mentioned above, Latvian is the only language of administration and official documents is Latvian according to the Official Language Law. However, Latgalian can be heard in many places throughout Latgalia on a daily basis. For example, local officials speak Latgalian among themselves. The same act requires all documentation to be processed in Latvian. However, for example in Kārsava in their internal correspondence officials use Latgalian.[8] In the municipality of Nautrēni, where Latgalians constitute 96 percent of the population, all names of the settlements are recorded in the documents in Latgalian.[9] Thus, too much depends on local administrations. Nevertheless, in most cases, public officials can speak Latgalian, but do not sufficiently master its standardized writing version.

One can also observe other manifestations of Latgalian distinctiveness. For example, shops and restaurants have signs with Latgalian names. In 2004, the town of Kārsava was the first in Latvia to set up 106 bilingual Latgalian-Latvian signs with street names. It was followed by another 195 signs few months later. Despite generally positive evaluation of this initiative by the Center for State Language, it has triggered sharp discussions, inter alia regarding the font size of the Latvian text.[10]

An interesting manifestation of Latgalian patriotism was also an attempt to swear an MP oath in Latgalian made in 2014 in the Saeima of the Republic of Latvia by Juris Viļums. However, it was denied by Solvita Āboltiņa, then the Saeima Speaker, who explained her decision by the fact that the oath should be taken in the literary Latvian language. In addition, it was confirmed that while taking his oath Viļums did not speak standard Latgalian and partly used Latvian words and pronunciation.[11]

The UNESCO Atlas of the World’s Languages in Danger classifies Latgalian as a vulnerable language.[12] It is actively used in families, neighborhoods and by the Roman Catholic Church, Moreover, Latgalians have relatively positive attitude towards this language. Thus, it is not in danger of being quickly extinct. However, despite more than 25 years of democratic rule in Latvia, it is difficult to speak of an additional state support for Latgalian.

While politicians in Riga have repeatedly stressed their positive attitude towards Latgalian, Latvia still fails to develop a consistent and coherent policy towards it. The ethnic policies of the country and the international situation have also determined their approach. The Latvian authorities are afraid of providing Latgalia with more capacities in the field of culture and language, as it could trigger more serious claims of other national minorities (i.e. Russians) and increase interference of Russian in the domestic policies of Latvia. Latvian Russians also favorably see the recognition of Latgalian as a regional language, as it could help in ensuring the same status for the Russian language thanks to the long-standing communities of Old Believers. Suggestions to ratify the European Charter for Regional or Minority Languages are rejected by Riga, as national politicians argue that it can neither refer to the migrant language (Russian), nor the dialect of the official language (Latgalian). However, one should not rule out the possibility that Latgalian could become a regional language similarly to the Kashubian language in Poland.