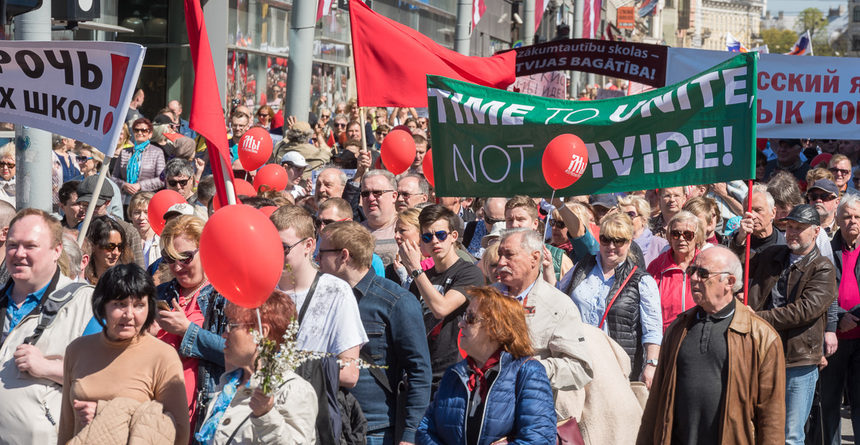 In June 2018, the parliament of Latvia has decided to Latvianize private higher education. This affects thousands of students, and human rights experts are objecting. This issue is addressed by our expert Aleksandr Kuzmin LL.M. from the Latvian Human Rights Committee (FIDH).

The tertiary education appeared in the territory of today’s Latvia in 1862, as the German-language Riga Politechnicum. It was renamed Riga Politechnical Institute and Russified in 1896, in course of that time imperial policies. In 1918, the German authorities re-established a German-language politechnicum in Riga, but it was short-lived. After the declaration of Latvia’s independence, the University of Latvia was founded in 1919. It has offered education in Latvian ever since.

In the 1920s, the government of independent Latvia also created an array of pedagogical institutes, including those functioning in Russian. Alongside public institutions, there were private ones, namely the Riga Herder Institute (German-language) and the Russian Institute of University-Level Studies. Both were closed after the ethno-nationalist coup-d’etat of 1934. The end of the RHI came due to the “Umsiedlung” (resettlement) of most Baltic Germans under pressure from both Berlin and Riga in 1939.

In Soviet Latvia after 1940, tertiary education was available both in Latvian and Russian. However, some specializations in humanities were offered in the former only, and some technical and military ones – in the latter only.

In 1992, newly independent Latvia confined instruction in Russian in public universities to the first year of one’s studies. Meanwhile, a number of private institutions of higher education appeared, including those catering for the demand for Russian language. The most successful among such private institutions was the Baltic Russian Institute, later renamed Baltic International Academy.

In 1998, the new Education Law imposed teaching in Latvian for public universities, with narrow exceptions. According to estimates from some of those involved, this was one of the reasons for the closure of the public Riga Aviation University in 1999. Notably, it was followed by the creation of a private Transport and Telecommunication Institute, with studies mostly in Russian.

Meanwhile, two English-language graduate schools were established by special laws and international treaties – the Riga Graduate School of Law (RGSL) and the Stockholm School of Economics in Riga (SSE Riga).

What do the recent amendments mean?

In late May 2018, the Ministry of Education and Science announced that it would propose to switch education in private colleges and institutions of higher education to the same language regulation as concerns the public ones. The main pretext was the need for uniformity of requirements for public and private institutions. A later interview by the minister Kārlis Šadurskis, however, discloses another motivation. It is the struggle against the “Russian world”, which the minister equates with propaganda and misinformation.

The proposals were submitted for the third – final – reading of the amendments to the Law on Institutions of Higher Education then pending before the Parliament. They were adopted on 21 June, 2018 and signed by President Raimonds Vējonis in July despite protests from business community, NGOs and private educational institutions themselves.

The narrow exceptions from this rule, earlier relevant for public institutions of higher education, shall now be applied for all. The main exceptions are language and cultural studies. Some more exceptions allow for the use of EU official languages – for foreign students, joint study programmes or up to 20 % of the credit point amount of a study programme. This results in a discriminatory attitude to all the other languages – an approach criticized by the Venice Commission in the Ukrainian case, as recently as in 2017.

Since 2019, private colleges and institutions of higher education will not be able to admit new students for the programmes not in line with the new regulation. The current students will have a possibility to study under the old programmes until 2022. Interestingly, the same parliament has also voted in 2018 to liberalize Latvian language requirements for SSE Riga staff.

What are the concerns of the UN experts?

In mid-October 2018, the Latvian Human Rights Committee contacted several UN Special Rapporteurs on human rights. Their letter to the Latvian authorities followed quite soon (on 8 November 2018). A notable fact is that the letter represents joint position of three UN experts, namely on minority issues (Fernand de Varennes), on freedom of expression (David Kaye) and on the right to education (Koumbou Boly Barry). It needs to be said that the same UN Special Rapporteurs have already expressed concern in January, over the amendments to the Education Law intended to further Latvianize primary and secondary schools. In the new letter, the authors make it clear that they remain concerned over schools as well, and request information on all level of education.

The authors specifically name not just some recommendations, but also legal obligations of Latvia which might have been violated by the June amendments to the Law on Institutions of Higher Education:

The tone of the joint letter is exceptionally harsh. At the end, the experts even raise the issue of accountability, should the alleged human rights violations be confirmed.

What can be done?

The new Parliament of Latvia was elected in early October 2018 (the author was a Latvian Russian Union candidate; the list did not gain representation). Most of the parties present in the new parliament are willing to continue Latvianization of education, as follows from their programmes and electoral campaigns.

There is a possibility to contest the amendments before the Constitutional Court of Latvia; the most perspective applicants would have been the private institutions of higher education. If the Constitutional Court decides in favour of the government, the claimants have good chances to win at the international level. “Uniformity” is a weak point against minority rights in education – this has been known at least since 1935. At that time, the Permanent Court of International Justice took a stand to defend private minority schools in Albania from the general prohibition of all private schools.

This is not just about the treaties mentioned by the UN rapporteurs. One can argue that the amendments also violate the UNESCO Convention against Discrimination in Education and Articles 4 and 13 of the Framework Convention for the Protections of National Minorities. To be clear, these conventions have no international courts to enforce them. However, there are opportunities for applying to the European Court of Human Rights. Under its ambit, relevant legal issues are not limited to right to education and anti-discrimination; one can claim a violation of property rights, as indicated by the prominent Russian jurist Elena Lukyanova.

However, international procedures are slow, and in case of UN Human Rights Committee, Latvian authorities do not consider them binding (see Raihman v. Latvia). Therefore, their practical efficiency is not certain.

What was the reaction of the Latvian authorities to criticism?

As at 26 November, their answer to the UN experts has not yet been published. However, on 21 November, the Cabinet of Latvia decided to go further with Latvianizing education as a whole. The ministers have adopted a new regulation on pre-school education. Its Annex 2 is a model programme for minority pre-schools. It provides that since the age of 5, the main language of communication in kindergartens must be Latvian. An exception is only provided for activities dedicated to learning minority’s own language and ethnic culture. These provisions, contrary to OSCE HCNM Hague recommendations and arguably also to the Convention on the Rights of the Child and to the Framework Convention for the Protections of National Minorities, will come into force in 2019.

Image: Rally in Riga to defend the right to schools in mother tongue, 1 May 2018. © Vitaly Drobot