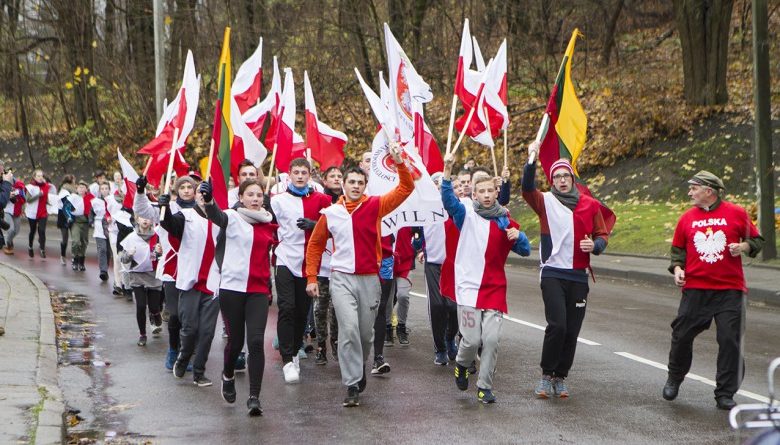 In the shadow of scandal: Poland’s Independence Day in Lithuania

In the shadow of scandal: Poland's Independence Day in Lithuania

The centenary of the restoration of Poland’s independence was widely celebrated not only in Poland, but also in Lithuania. Nevertheless, the celebration happened to be seriously spoiled due to another scandal related to the personality of Michał Mackiewicz, Lithuanian MP and chairman of the Union of Poles of Lithuania (UPL). The reasons of the scandal are discussed by our expert Ewelina Knutowicz.

The “double” commemoration of one hundred years of Poland’s independence on 11 November 2018 at the Rossa (Rasos) cemetery in Vilnius has gained notoriety. The representatives of the Union of Poles in Lithuania accompanied by students of Polish schools were the first to lay wreaths at the Mausoleum of the Mother and the Son’s Heart, dedicated to Marshal Józef Piłsudski and his mother. A few hours later, the same was done by the Ambassador of Poland to Lithuania accompanied by the representatives of other Polish organizations. In fact, the holiday was pulled into two because Michał Mackiewicz wanted at any costs to avoid Urszula Doroszewska, Poland’s ambassador to Lithuania. The cause of Mackiewicz’s behavior was the scandal that took place in Summer 2018 and involved accusations of the UP leadership of violations related to financial assistance from Poland.

Experts believe that this behavior of the UPL leadership did not correspond to the atmosphere of celebration and was an attempt to split the Polish community in Lithuania. According to Robert Duchniewicz from the Social Democratic Party of Lithuania, “celebrations at the Rossa cemetery were similar to a contest, as both the sides competed to attract more people. Everything looked very strange and there is no need to hide the fact that the Polish community is surprised by this situation.” A Vilnius-based lawyer and blogger Aleksander Radczenko emphasized personal ambitions of the UPL leadership which caused disagreements on the Independence Day. He believes that the centennial celebration required the community’s unity, while all conflicts had to be forgotten at least for the duration of the commemorative and festive events.

Mackiewicz rejected all accusations and explained the double commemoration at the Rossa cemetery by inability to reschedule other commemorative and festive events on this day to accommodate everybody’s needs.

Two facts should be reminded in this regard. First, at the congress of the Union of Poles of Lithuania in Summer 2018, Mackiewicz was again re-elected as the Union’s chairman (342 participants voted in favor and eight abstained). Mackiewicz’s conflict with Poland’s ambassador Doroszewska was accompanied by a number of his arrogant statements, including the following one: “She (Doroszewska – EK) believes that she can summon me, a member of the Seimas of Lithuania, and say that she restricts my rights. And who is she at all?” Mackiewicz further characterized the stance of the Poland’s ambassador towards him is worse than that of the officials of the communist Poland.

Second, on 2 November 2018, Alicja Klimaszewska, honorary chairperson of the Committee for Public Aid for the Old Rossa cemetery, acknowledged that during the restoration works at the old cemetery she didn’t feel any support from the Electoral Action of Poles in Lithuania – Christian Families Alliance (EAPL-CFA), the party that claims to represent the interests of the Lithuania’s Polish minority. The EAPL-CFA representatives at the Vilnius City Council preferred not to comment on this issue. Dariusz Żybort, the chairperson of the said Committee, explains that “there is no conflict as such, but there is no interest either, although politicians (such as Jarosław Kamiński) as members of the City Council Committee appeal to the restoration of the Rossa cemetery. However, I think they learn everything from the media.”

These internal conflicts with Lithuania’s Polish minority clearly demonstrate the crisis of its current leadership and the deficiency of its public mandate to speak on behalf of the entire community. However, these conflicts can generate positive changes. According to Aleksander Radczenko, the current changes in the Polish community in the Vilnius region resemble Ukraine’s Revolution of Dignity in some ways. He stresses that “people stopped fearing the local leaders of the Polish parties, create their own organizations, start talking loudly about problems within the Polish community.” Radczenko also underlines that the Polish language media in Lithuania became more independent and objective in their views.

Robert Duchniewicz emphasizes the excessive ambitions of the UPL leadership. He believes that “this isn’t good enough to impose own demands on the Poland’s embassy and to explain what policies should Poland pursue towards Lithuania.” With regard to possible changes, Duchniewicz concludes that “the Mackiewicz’s case and his insolent behavior towards the ambassador of Poland was most likely a turning point.”

Note: This text was prepared in cooperation with InBaltic.

Image: Celebrations of the centennial anniversary of the restoration of Poland’s independence in Vilnius, 11 November 2018. © zw.lt / Roman Niedźwiedzki