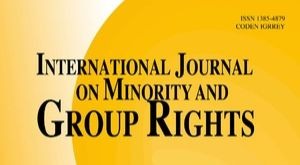 In 2018, an ICELDS Board member Dr. Alexander Osipov issued an article on so-called non-territorial autonomy (NTA) for ethnic groups in International Journal for Minorities and Group Rights (Alexander Osipov. “Can ‘non-territorial autonomy’ serve as an analytical term? Between ‘thick’ and ‘thin’ approaches”, International Journal on Minority and Group Rights, 25 (4), 621–646, DOI:  10.1163/15718115-02503008). In May, the article was published online and in September in IJMGR’s Vol.25, No.4.

The article addresses the idea that is in high demand among scholars and practitioners although it has never been implemented in full over the last 100 years. NTA is an expanding area of scholarly debates and politics. However, the interpretations and terminology lack uniformity and certainty. The dominant approach to NTA as self-organization of ethnic groups for running their own affairs often does not explain the practices on the ground and their outcomes. Non-territorial autonomy (NTA) has acquired a variety of meanings ranging from a vague principle (a ‘thin’ approach) to a distinct structural feature of an organization (a ‘thick’ approach). Almost all these interpretations rest on an uncritical reification of such notions as ‘group’ and ‘community’, or, in other words, on imagining social relations as objectively given entities. Different arrangements and practices are labelled as NTA, and this duplicates the existing terminology and brings no added value to the study of these phenomena. The underlying assumption of such approaches is imagining ethnic groups as bounded entities and social actors. Therefore, all activities related to group divisions and specificities are by default conceived as the self-organization and the pursuit of interests of groups as such. The most popular model of NTA as a corporate organization of ethnic groups has never materialized in full. The promotion of these ideas for communal self-organization are based on the same ‘groupist’ premises and as a rule involve negligence of potential scenarios and outcomes on the ground. The author concludes that interpretations of NTA based on groupist assumptions significantly limit analytic perspectives. There can be other interpretations, not based on a groupist approach. They can serve for analytical purposes, but their application is optional and barely instrumental. Beyond this, NTA shall be regarded and studied as a category of practice and a matrix framing diversity issues among practitioners.