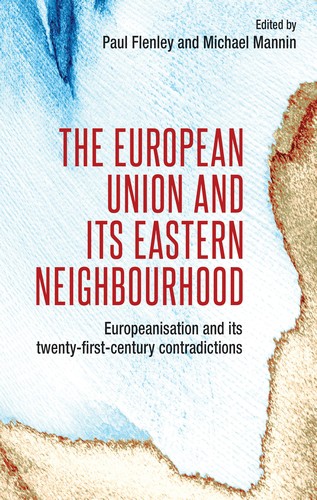 ICELDS Board Member Dr. Kiryl Kascian contributed to the volume European Union and Its Eastern Neighbourhood: Europeanisation and Its Twenty-First-Century Contradictions, edited by Paul Flenley and Michael Mannin, and published by the Manchester University Press in January 2018.

The chapter by Kiryl Kascian is entitled “Belarus: does Europeanisation require a geopolitical choice?” (pp. 86-98).

As Paul Flenley and Michael Mannin emphasize in the Introduction,

“Belarus is an ‘in-betweener’ country apparently caught between the choice of EU and Russia. Kiryl Kascian, however, shows that this is not a choice which the Belarusian authorities wish to make – they instead seek a relationship with both the EU and Russia. Belarus provides perhaps the starkest example of the limitations of the EU’s values-based approach to its neighbours. Belarus’s domestic political system and its prioritisation of the relationship with Russia mean that the EU lacks any real impact. Belarus does, however, seek a more pragmatic, interest-based relationship in contrast to the EU’s values-based approach which appears to be going nowhere. The chapter also raises the problems of the perception of European identity promoted through EU-isation. While Belarus considers itself European and at the centre of a wider Europe, EU-isation, as it is currently configured, relegates it to the periphery” (p. 3).