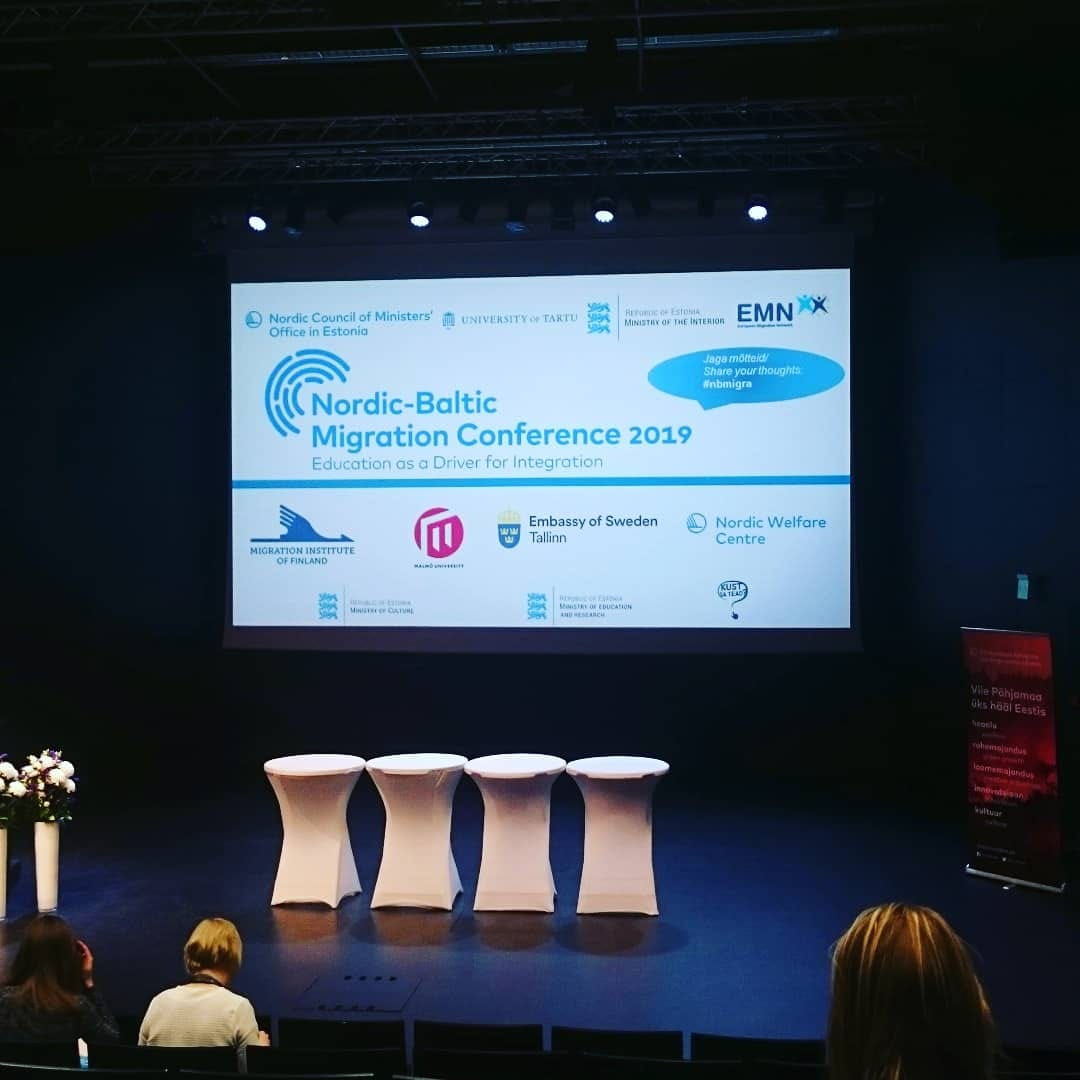 The Nordic-Baltic Migration Conference 2019: Education as a Driver for Integration was organised by the Nordic Council of Ministers’ Office in Estonia, the University of Tartu, the Ministry of the Interior of Estonia and the Estonian Contact Point for the European Migration Network and took place at KuMu Art Museum in Kadriorg, Tallinn. Since 2012, the conference became an annual event focusing on a specific theme. This year the main attention of the conference was devoted to migration policies, including the role of education in integration of migrants to the societies and labor markets of the receiving countries.

The Minister of the Interior Katri Raik gave the opening address, describing student migration as “the most pleasant of all migrations”. Her rather short speech provided a quick overview of student migration related statistics as well as rebuffed prejudiced – and often xenophobic – opinions that recently came back to the public discourse[1],[2],[3] due to electoral success of right-wing Conservative People’s Party of Estonia (Estonian: Eesti Konservatiivne Rahvaerakond, EKRE) at the recent parliamentary elections. According to the Estonian National Electoral Committee and the State Electoral Office, in the 2019 Parliamentary Elections, EKRE received 17.8 percent of votes, compared to 8.1 percent in the 2015 elections.

In terms of statistics, Minister Katri Raik presented following data: as of 31 December 2018 the Police and Border Guard Board issued 2,730 student visas, mostly to the nationals of Russia, Ukraine, Nigeria, Bangladesh and India. The biggest number of foreign students still comes from neighbouring Finland. In total, only 20 percent of those foreigners who acquired a university degree in Estonia remain in the country. Minister Raik made a special emphasis on the fact that it is of outmost importance that incoming students would “learn our language”, as Estonia is rather a country state with a conservative approach towards migration.

As a matter of diffusing the stereotypes about foreign students [4],[5], Minister Raik highlighted that a dropout rate of non-Estonian students is only 9 percent, compared to 15 percent among Estonian nationals. Moreover, the Police and Boarder Guard Board assured the office of the Minister that “there are no problems with foreign students” in general.

As the first keynote speaker, Aune Valk, Vice Rector for Academic Affairs at the University of Tartu, provided an overview of internationalisation and its dilemmas focusing on the empirical case of the her university. The main problem many national universities face today is achieving a delicate equilibrium between preservation of the national language and culture, and becoming internationally competitive institutions. The former requires vigilant protection of programmes offered in the Estonian language, while the later entails the increasing number of degree opportunities available in English.

From a practical standpoint, “internationalization” of a programme can be beneficial because of the two reasons: (1) it allows domestic students to acquire a proficiency in the English language; (2) it helps to preserve programmes that are less popular – and consequentially less economically feasible – by opening them for foreigners and thus increasing the number of students (for example, MA in Philosophy which previously attracted about three students per year, while after “internationalization” this number increased to ten).
However, Aune Valk underlined that whether a certain programme would be transformed into an English-language one depends heavily on needs of the Estonian labor market. As such, the IT-related study programmes were the quickest to become “internationalized”. Approximately 80 percent of the foreign IT graduates are able to stay in Estonia due to post-graduation employment, Hence, it is rather safe to say that the labor market needs are satisfied.

Overall, 13 percent of the MA students and 27 percent of the PhD candidates at University of Tartu are international students. This number, however, was not achieved at the cost of spots of the Estonian students, since the university simple increased the admission quota. On the other hand, “internationalization” of higher education did mean a replacement of programmes offered in the Russian language by those offered in English. As such, members of ethnic Russian and Russophone minorities will have to acquire higher education in either Estonian or English, which fits the general trend of the Estonian government to substantially reduce the education in Russian both at schools and universities.

Interestingly, acquiring higher education in English may be more beneficial for the members of ethnic Russian and Russophone minorities in terms of career prospects. Knowledge of the Estonian and Russian languages is significantly beneficial only in services or sales, but not other areas of employment. Proficiency of any non-English foreign language is essentially beneficial only for those who work in the sphere of education. In contrast, Russian native speakers with strong English skills benefited from it more than native Estonian speakers. In addition, the former were more likely to gain and retain employment. That, however, is a feast during a plague, as – according to Aune Valk – English skills remain noticeably low among the members of ethnic Russian and Russophone minorities. Thus, it triggers an additional question – how can youngsters from ethnic minority access higher education in English at all with such limited linguistic competence?
Another great problem of Estonian higher education, as outlined by Aune Valk, is limited mobility of Estonian students. As of 2018, only 10 percent of the graduates spent a portion of their studies abroad as a part of student exchange. Compared to the data from 2008, it is still a major improvement (the number of outgoing students was barely 2 percent then). As potential causes of this behaviour the following was mentioned (1) student employment as it is common to work during the studies; (2) structure of studies which does not integrate student exchanges well enough and makes them unpractical for a student.

In order to provide a wider context, the next presentation given by Tuomas Martikainen, Director of the Migration Institute of Finland, highlighted trends in global migration. At the very beginning he emphasized the fact that also does not support the main claims of far-right parties – the European Union is not a very popular immigration destination, especially compared to the US and Canada.

In terms of global migration, several trends are more likely to continue:

However, Tuomas Martikainen reminded the audience that main trait of humankind is high adaptability, due to which it is most likely that people will engage in finding creative solutions to existing climate hardships. Moreover, social, economic and political factors are still and will likely remain the major influencers of migration.
In addition, Tuomas Martikainen drew attention of the public to the recently published Global Future and International Organisation of Migration (2017) report, which outlined four possible future scenarios of the states’ responses to global migration. As for the Nordic-Baltic region, the scenario of cooperation is the most likely – not to mention the most desired – due to rather humble sizes of countries in said region. As for student migration, two current trends – (1) migration from a developing to a prosperous country, and (2) migration from a prosperous to a prosperous country – are likely to continue.

An overview of Estonian migration policies was presented by Birgit Lüüs, Deputy Head of Citizenship and Migration Policy Department at the Ministry of Interior of Estonia. Estonia is a prime example of gradual relaxing of immigration policies in the post-Refugee Crisis context. Since 2011, several changes in residence and studentship laws were introduced and two migrant integration programmes were financed.

In 2013, incoming international students were exempt from a yearly immigration quota (0.1% of population of Estonia). This exemption also applied in the case a foreign student was able to gain employment after graduation from the Estonian university. In 2016, exemptions from salary requirement and from acquiring a permission from the Unemployment Insurance Fund (UIF) for foreign-born graduates were introduced. In addition, said graduates were granted six month extended legal stay after completion of their studies.

2017 brought changes in issuing of residence permits. Now they could be acquired until the nominal end of the study period, while before the 2017 change the said permits were granted only for one year at a time. Additionally, residents who acquired doctorate degree could apply for a permanent residence permit without having to fill a five-year stay requirement. In 2018, legal stay after the completion of studies was extended to 270 days after the graduation, replacing previous six months limit. In terms of services, the Ministry of Interior and Police and Boarder Guard Board jointly launched two initiatives – Migration Counselling and Welcoming Programme. The Migration Counselling is provided in three languages – Estonian, Russian, English. It has representative offices in Tartu, Tallinn, Narva, Pärnu, and Jõhvi. In 2018, approximately 15,000 contacts were made. The Welcoming Programme is aimed at facilitating integration into Estonian society and introducing functioning of the Estonian government to foreigners. The programme is available in Tallinn, Tartu, and Narva. In 2018 it attracted approximately 4,000 participants.

A perspective of Finland regarding student migration was brought by Irma Garam, Senior Adviser at Finnish National Agency of Education, Information and Analysis. Finland’s two top priorities entail attracting talents to the country, and increasing its international competitiveness. Promotion of internationalization of higher education was outlined as a priority in the vision of the Ministry of Education and Culture of Finland 2017-2025, which resulted in launching the “Talent Boost” cross-sectional programme, which aims at making Finland more attractive for foreigners. Moreover, Finland provides a one-year job-seeking permit for the non-EU graduates. However, despite this initiative less than a half of the international graduates work full-time or half-time three years after their graduation.

On the other hand, promotion of student mobility generated some positive outcomes. According to 2008 study, 57 percent of Finnish citizens studying abroad come back to Finland one to five years after their graduation. The biggest study migration destinations are Estonia, Sweden, the Netherlands, Germany and the USA. This is caused mostly by a limited number of spots available at Finnish universities, especially in the fields of Business Administration, Humanities, Medicine, and Social Sciences. That is why students from Finland move to the countries with lesser competition in admissions.

The main trends in terms of student mobility in Sweden are the following – (1) most of exchange students are from the EU-countries, clearly benefiting from the opportunities provided by Erasmus+ programme; (2) most of the free-moving full-degree students come from non-EU countries and thus are subjected to tuition fees. One of the main problems with increasing numbers of the EU-born students is rather complicated – both practically and bureaucratically – situation with student accommodation and its queue system. Bureaucracy, especially in visa-applications, also contributes to the so-called funnelling when it comes to non-EU students, due to which Uppsala University receives a great number of applications every year, yet only a few of them can commence their studies.

About 20 percent of international graduates remain in Sweden two to five years after their graduation. Those who stay provide a high tax revenue, which greatly exceeds cost of their education.

An in-depth overview of student migration in Estonia was presented by Eero Loonurm, Head of International Marketing at Archimedes Foundation. In general, Estonian higher education had experienced a rapid growth as well as large-scale internationalisation in the past 10 years (2008-2018). The number of foreign students rose from 840 (2008) to 5,047 (2018) and is now encompassing 125 nationalities. The biggest “sender” countries are Finland (28 percent), Russia (7 percent), Nigeria (5 percent), Ukraine (5 percent), and Turkey (4 percent). In total, 38 percent of international students come from the EU (without Finland, this figure would be only 10.4 percent). The most popular study fields are Business Administration, Law, Humanities, Arts, and ICT.

As of 2018, the biggest portion of foreign students were acquiring MA-level education (42 percent) followed by BA-level education (34 percent). Since 2012, Estonia is a receiver and not a sender-country in the case of Erasmus+ facilitated exchanges. Moreover, a reversal of student migration trend between Finland and Estonia was observed in 2017, as now more Finns study at the Estonian universities than Estonians study at the Finnish ones. Another quite interesting finding of a study conducted by the Archimedes Foundation is that every 6th student from Russia (63 students from Russia in total in 2018) is enrolled in a programme offered in the Estonian language. This fact is truly fascinating and calls for a much deeper research.